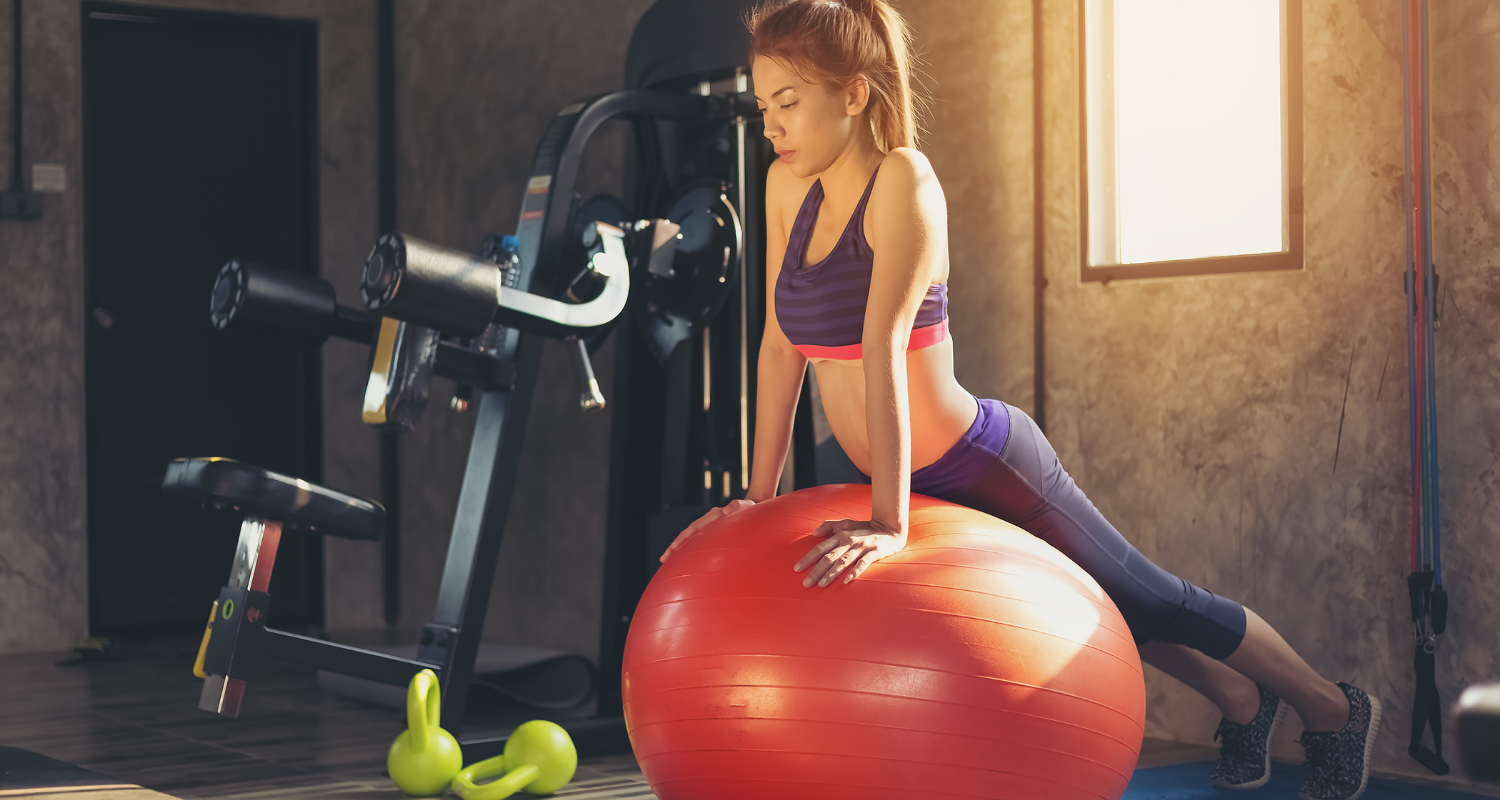 Posted by WorkoutHealthy on 7/19/2021 to General Fitness

The Swiss ball's main benefit for any user is in the instability, or the wobbling, that the ball forces us to counter in order to keep our balance and directional intent. Stability balls are often talked about as being good for the “core.” Using stability balls does, in fact, benefit the core, meaning:

Stability ball exercises will affect flexibility and agility and gradual development of strong muscles with more resilient joints and connective tissue. They are basically one of the training aids for calisthenics. Of course, fitness enthusiasts in recent decades have developed the old world, military-based drills of antiquity testing soldiers’ ability to stoop, reach, push, lunge, and climb further into a variety of free body exercise forms that still tend away from using additional weights or machines though they tend toward requiring some sort of apparatus – like a stability ball – or structure to lean on or from which to hang or suspend the body. Popular forms of this calisthenics practiced in modern times include Parkour, Gymnastics, Tai Chi, Yoga, and Pilates.

Benefits of calisthenics closely tie to disciplined execution and attention to detail. Core strength is built by challenging practitioners to control fully and their own bodyweight. Calisthenics also promote improved flexibility and body mobility when the exercises progressively take the major joints through a full, controlled range of motion – like squatting with hips dipping to the knee’s height. Along these lines, stability ball exercises help an individual to become more mindful of their body and aware of the component actions that must blend smoothly into the physical act.

A basic stability ball exercise; often the starting point for more complex movements using the ball. To plank with a stability ball, lie prone (i.e., on your stomach) on the ball, with your toes initially touching the floor; progressively lean forward until your toes lose contact and your fingers gain contact with the floor. Keep leaning until you are able to “walk” your hands forward, shifting from your stomach resting on the ball to your hips to thighs and, with practice, eventually moving to shins, ankles, and feet. The objective is to keep your body rigid like a plank of wood: muscles of the core flexing in conjunction with shoulders, chest, and arms in order to achieve and comfortably hold this position.

Take the plank further. Once you can plank past the ankles, allow the elbows to bend, lowering your chest and descending all but your feet toward the floor, going to just a hair above touching your chin on the floor. Push up and return to the top. Maintain your inline legs, torso, and head throughout.

The inverse of push-ups. Get beneath a low-set crossbar (i.e., perpendicular) – like a Smith press machine or a barbell set on the safety bars of a squat cage – and prop up the back of your feet on the stability ball. The bar should be at a height approximately equal to the top of the ball; making your legs and torso level when your back and biceps are flexed with your chest in contact with the bar. Lower yourself away from the bar and, when you reach full extension of your arms, pull yourself back toward it.

Basically the same as recline pull-ups; but, the (now two) bars must be parallel to the body (i.e., running the same direction from feet to head) rather than perpendicular.

Call for positioning oneself prone, with the stability ball under the top of the hips/lower stomach, with the knees straight and forearms crossing the chest like a mummy or behind the head. The body should initially be at an angle to the floor, where the ball forms a pivot point near the hip. Slowly break at the hip, allowing the torso to move down and slightly in toward the ball. When chest contact is made with the ball, drive back up, to bring the entire body into a straight line; ankles, knees, hips, and shoulders in the same line.

Will have you place a stability ball behind the lower back against a wall with your feet leading (i.e., in front of) your hips. Bend at the knees and lower yourself such that the hips descend to a point equal to or lower than the height of the knees. Then, stand back up, allowing the ball to roll along the wall.

Another plank derivative. Pike-ups imitate leg raises from a different direction. Assume a plank position with shins on the ball. Now break at the hip, driving your butt up, while your head is allowed to slip between your arms so that your body gets into the shape of an upside-down V. Move from plank to V to plank.

Lie with the ball placed beneath your lower back, feet resting on the floor, and forearms crossed over the chest. Allow your torso to hang off the ball without losing your footing. Squeeze your stomach muscles to pull your chest away from the floor. Relax and repeat.

Take the crunch a bit further. For this, place your cupped hands against your ears. As you squeeze your stomach muscles to crunch, simultaneously draw one knee up toward the opposite elbow, breaking one foot’s contact with the floor. Relax and repeat with the alternate knee and elbow.

Require lying such that the ball is beneath the side of your stomach. The objective is to drive the high shoulder away from the floor, working the lateral oblique muscles. Switch to the other side and repeat.

Excellent for working the transversus abdominis, also known as the transversalis or transverse abdominal. This deeply situated, band-like muscle of the anterior (front) and lateral (side) abdominal wall is located a layer below the internal oblique muscle. It stabilizes the spine and pelvis via hoop tension around the core – like a girdle. Lying trunk twists start with the stability ball under your back and feet resting on the floor. You can hold a medicine ball, dumbbell, or other sources of resistance over your chest. While keeping your lower body in place, twist your upper body to one side (with whatever might be held in your hands moving to the side too), and then twist to the other side.

Start with you seated on the ball. Twist from side to side with your trunk upright.

Start from a modified plank: ankles hugging the sides of the ball. In this variation, the upper body is stationary while the lower body twists, allowing the ball to roll.

These stability-ball-assisted calisthenics may serve some weight trainers simply as preparation for more vigorous activity but strength athletes shouldn’t neglect the fact that stability ball exercises can be incorporated beneficially into their weight training routine. Aside from engaging the muscles of the core during the big lifts (i.e., squats, deadlifts, etc.), one can train the rectus abdominis, obliques, transversus abdominis, and erector spinae directly via crunches, pikes, trunk twists, side bends, and back extensions.

Powerlifters benefit greatly from a well-conditioned core, especially the transversus abdominis, as it properly begins stabilization efforts for squats and deadlifts. Ideally, these muscles should tense before action of the extremities (i.e., arms and legs) in a lift. Proper form in the big lifts is contingent on a stable spine; efficiently recruiting muscle in the extremities depends on core stability.

Weakness or failure to engage the transversus abdominis means stabilization efforts are left entirely to smaller, segmental spinal-stabilizers, increasing the potential for lower back pain and joint degeneration.

Stability ball exercises will contribute to good core musculature and inter-muscular coordination (i.e., fluidity), flexibility and joint stability. Stability balls achieve this in the same way that free weights do: by making a person use all the smaller, supporting muscles that, as the saying goes “they didn’t know they had.”

Highly adjustable, portable, and naturally motive exercises with a stability ball demand stabilizing and assisting muscles to hold the body in the desired position, balancing along a path of motion. This is very beneficial to the development of the core, in all three senses of the word.