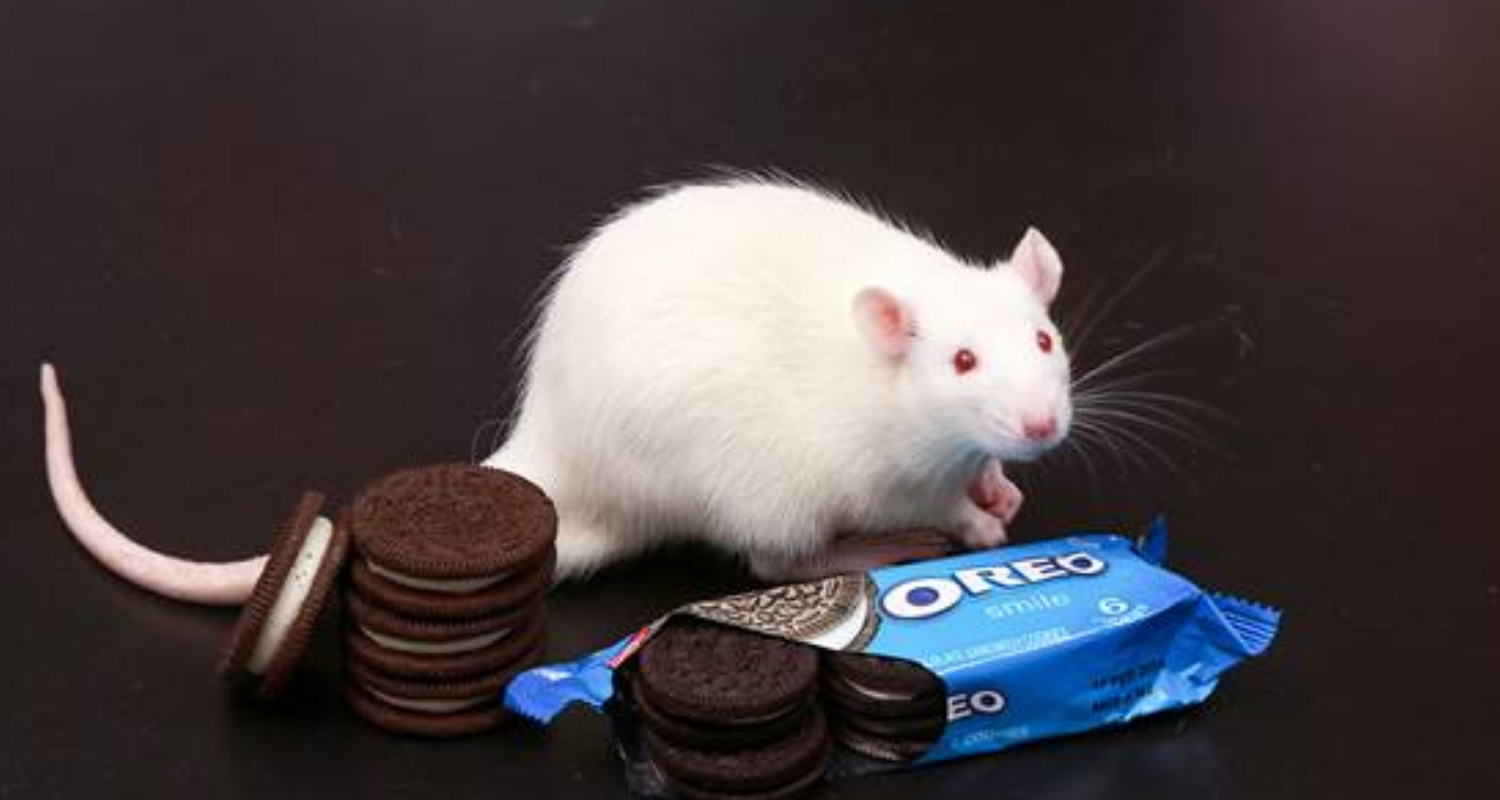 The latest news about high-fat, high-sugar food (Oreo cookies in this case) comes from Connecticut College professor Joseph Schroeder and his students. They claim that Oreo cookies may be as addictive to rats as are cocaine and morphine, and deduce from this that the obesity epidemic is in part caused by a drug-like addiction to junk food.

In fact, Professor Schroeder says, "Our research supports the theory that high-fat, high-sugar foods stimulate the brain in the same way that drugs do.”

Jamie Honohan, one of Professor Schroeder’s students, selected Oreos because they are America’s favorite cookie (and this undisputed fact shocks me because Oreos are what I call “fake” chocolate—an unexciting kind of cookie).

Honohan also remarks that high-fat, high-sugar foods “are heavily marketed in communities with lower socioeconomic statuses.” Obesity is more prevalent in such communities, but not because junk food is “heavily marketed” in those areas.

TV commercials and magazine ads for sugary, fattening foods are national—how can they be marketed more “heavily” in a poor neighborhood than in an upscale town 10 miles away? I found this detail of the study rather odd.

Hungry rats were fed Oreos on one side of a maze. On the other side of the maze they were fed rice cakes. Rats love Oreos and don’t care much for rice cakes.

The next step was that the rats were allowed to hang out at either side of the maze—with no food. The students recorded the length of time the rats spent on the side where they’d been given the cookies, compared to the rice-cake side.

The experiment was repeated with a second group of rats. Everything was identical except what the rats were “fed.” In this second group, the rodents were given cocaine and morphine, which are addictive. On the other side of the maze they were given a saline solution.

The Oreo rats hung out on the Oreo side of the maze for the same length of time that the drugged rats spent on the drug side of the maze. This result indicates, says the research team, that Oreos (or any high-sugar, high-fat food for that matter) are addictive.

I fail to see how preferring the cookie side of the maze indicates addiction. Why wouldn’t a rat prefer to hang out on the cookie side? This phenomenon, when you think about it, occurs among humans all the time in varying degrees.

But let’s be more deliberate about it: Imagine you’re a guest in someone’s home and every time you’re in a particular chair, you’re offered the most delicious potato chips you’ve ever had—the kind that you just can’t stop eating.

It won’t be long before you’ll be doing most of your sitting, if not all, in the potato-chip chair, even when you know your host won’t be offering any food. This does not mean you’re addicted to potato chips!

Nevertheless, Professor Schroeder also points out an additional component to the research: He and another student measured the expression of c-Fos, a protein in the pleasure center of the rodents’ brains.

This protein, says Professor Schroeder, indicates how many cells were “turned on” in a particular region of the brain in response to the Oreos or drugs. This doesn’t seem to prove addiction, even though the Oreos piped up many more neurons than did the cocaine or morphine.

If you (or a rat) enjoy something so much that it makes you spend time in the area where you’ve been given the substance, why would this mean you’re addicted?

A variation of this study should use an agent that cannot be ingested, such as something that yields tactile pleasure to the rats, or, for humans, maybe the test subjects’ favorite music, a tantalizing aroma, a shoulder massage, etc.

I’m betting that the rats and people would spend the same amount of time wherever they were exposed to these enjoyable stimuli as would a second group of rats and humans given drugs. I’m not banking that researchers would conclude that rats or humans are addicted to an aroma, sound or shoulder massage.

Despite what appears to be a few flaws in this study, the premise of food addiction—or, at least, food and drugs causing similar brain activity—is supported by other research. Perhaps addiction isn’t an “either/or” situation, but rather, a continuum.

Many people with “food addiction” or “addiction” to a particular food like cookies have conquered this (committed themselves to healthy eating and exercise), and actually continue eating the sinful food (e.g., on a weekly cheat day) but with restraint. A true addict would relapse quickly. This is why alcoholics, to stay sober, can’t ever have another drink again.